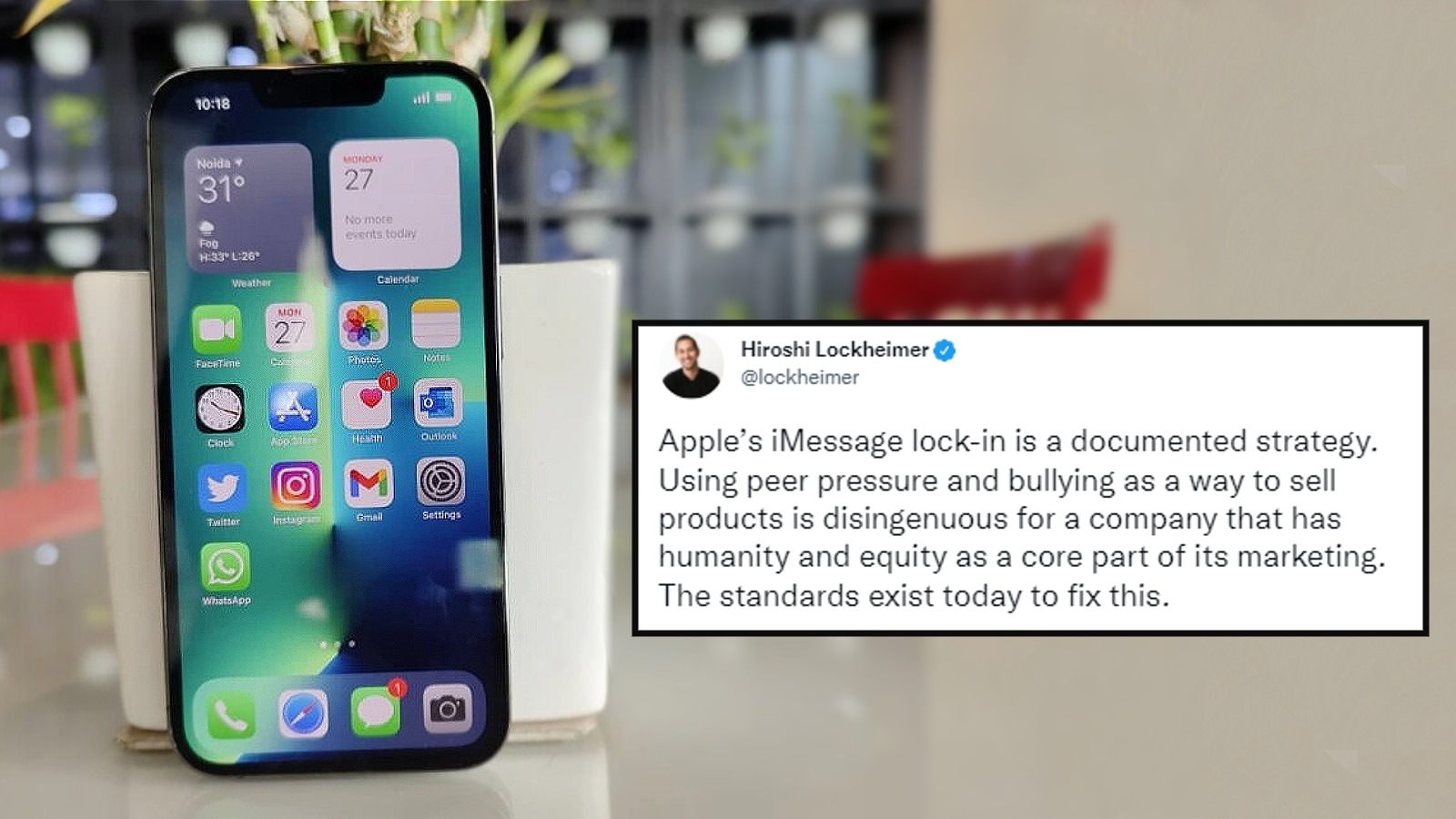 Google has long struggled to catch up with the popularity of Apple’s iMessage on its own Android operating system. The hype around it never seems to die down though, partly due to the exclusivity that the younger audience of the messaging system maintains. A top Google executive has now blamed Apple for banking on unethical means for this lock-in system.

In a recent tweet, Google vice president for Android, Hiroshi Lockheimer pointed a finger at Apple for relying on “peer pressure and bullying” for the wide dominance of its iMessage among teens. The tweet comes in a response to a recent story by the Wall Street Journal (WSJ) that mentions Apple iMessage to be the dominant service of its kind.

In his tweet, Lockheimer calls out Apple’s iMessage lock-in to be “a documented strategy” that uses peer pressure and bullying as a way to gain more audience. With this, Lockheimer blames Apple, often known for promoting harmony and equality through its services, for not fixing this situation, even when the solutions for the same are already present.

What does this mean?

The report by WSJ sheds light on how young Android users may face discrimination within their peer group which has iMessage (or Apple product) users. The report even shares a reaction of a young iPhone user at the possibility of dating someone with an Android smartphone, highlighting the clear ridicule that is often extended by the former party to the latter.

This is the sort of “bullying and peer pressure” that Lockheimer talks of in his tweet. Even though largely unethical, the result of this lock-in system has a profound impact on the adoption of iMessage and other such Apple services. And since many of these services are exclusive to Apple products, Apple’s products have skyrocketed in sales among the young audience for the past many years.

To get an idea of this dominance, the WSJ report quotes a survey that mentions that 87 per cent of US teenagers own an iPhone.

It is not just the unethical ways of promotion that Lockheimer points out through his tweet. His blame is the latest in a series of tweets highlighting Apple’s ignorance of the Rich Communication Services or RCS. RCS is a messaging protocol put in place by the GSM Association and is meant to enhance the SMS service.

Often referred to as SMS 2.0, RCS brings many iMessage-like features to texting. It has been adopted by Google for all Android phones. Apple, however, refuses to use it for iPhones, likely because this would establish a standard communication channel between iOS and Android devices, hampering the former’s exclusivity.

Because of Apple’s refusal to switch to RCS, all communication between iPhones and Android phones is still carried out by the earlier SMS standard. As a report by Forbes points out, the SMS version 1 is not secure and prone to hacks, and that “no-one should message over SMS v1 anymore.” By sticking to maintain its exclusivity, Apple is essentially keeping its profits over its user’s well-being.

Lockheimer, very smartly and subtly, hints at this in his latest tweet. The use of the word “documented” refers to Apple’s legal fight with Epic Games, wherein internal documents, as well as some top executives of Apple, confirmed that the company kept iMessage exclusive to Apple devices to ensure its iPhone sales. Craig Federighi, Apple’s senior vice president of Software Engineering, specifically referred to iMessage’s exclusivity as an “obstacle to iPhone families giving their kids Android phones.”

Tesla Cars’ Heating Issue Being Evaluated Over Safety Concerns in US

Instagram is testing a TikTok-style vertical scroll for Stories

TSMC to Boost Chip Spending in 2022, Sees Multi-Year Growth Ahead