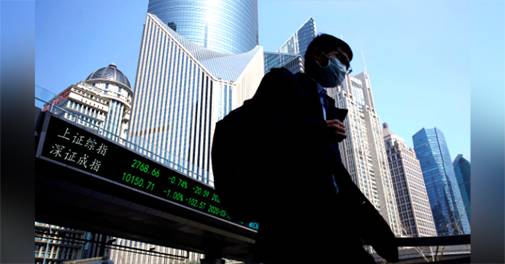 Worsening China-U.S. friction, worries over aid to Americans and U.S. businesses and a stumble on Wall Street combined to push world shares lower on Friday.

The latest dust up between the two biggest economies comes amid allegations of theft of U.S. intellectual property – including by Chinese researchers with military and government connections – for Beijing’s benefit.

“Alongside the eviction of the Houston Chinese Consulate, the risk of the U.S.-China conflict escalating into a “Cold War” is worrying,” said Hayaki Narita of Mizuho Bank.

A speech Thursday by U.S. Secretary of State Mike Pompeo’s saying that “securing our freedom from the Chinese Communist Party is the mission of our time” adds to the rhetoric certain to incense Beijing, making it still more difficult for either side to back down, he said.

“And so, while the inevitability of deteriorating US-China relations as a structural feature of our geo-political landscape was never in doubt, the shifts appear to be hastened,” Narita said.

Analysts said investors also are wary over the unclear prognosis for further stimulus for the U.S. economy, just as the end of a previous package of extra support for those made jobless by the pandemic looms.

Republicans in the Senate were set to unveil their proposals for a $1 trillion COVID-19 rescue package Thursday morning, but that got delayed. Finding a compromise with the Democratic-controlled House of Representatives could prove more difficult than it was in March, when Congress produced a $2 trillion rescue package.

A report Thursday that the tally of American workers applying or unemployment benefits rose last week by 109,000 to a little more than 1.4 million broke a stretch of 15 straight weeks of improvements. That shook investor optimism that the recession might be shorter lived than expected.

Rupee slips 23 paise to 74.98 amid strong US dollar, weak equities

Social stock exchanges in India: Can they help lift the underserved?