Price-tags of daily groceries from oil and spices to rice and hair oils have risen between 10% and 22% since January this year, according to retail analytics platform Bizom, on the back of higher commodity rates. This has impacted volume sales, particularly in rural markets dragging down the market growth.

Price hikes in non-food categories, however, aren’t so steep with soaps and detergent prices up by 1-3%.

“We don’t see inflation ebbing anytime soon given the volatility in global markets. There are still no signs of demand recovery,” said Anil Chugh, head of the foods business at Wipro Consumer Care. “With prices of many commodities still above last year’s level, we expect companies to pass any benefit from falling palm and crude oil through promotions and not direct price-cuts, amid uncertainty.”

After shooting nearly 35% in first quarter, edible oil prices have come down consistently, but are still 5-22% higher across segments since January. Similarly, inflation in spices remains high at 3-17% despite India being among the largest exporters of spices. Branded essentials including rice, atta and refined flour too have shown a sharp double digit rise in prices, according to the data.

“As we get into the festival season, it is critical to see the prices of key commodities. The government focus has now shifted towards increasing supply and hence dropping prices of other key food essentials like rice. This should help control some of the headwinds,” said Akshay D’Souza, chief of growth and insights at Mobisy Technologies, which owns Bizom, a platform that transacts with 7.5 million retailers.

Marico managing director Saugata Gupta expects commodity costs to come down by the third quarter. “There are three components of inflation — food, vegetable oil and crude oil. As a country, the impact of staples inflation is not that much. Vegetable oil, especially palm, an input for a lot of personal products, has fallen, so has edible oil. Crude still remains at an elevated level. So, compared to last year, commodity costs are still higher but by the third quarter, we feel they should come down,” he said.

A report by Nirmal Bang said its internal FMCG Commodity Price Inflation Index, which tracks the movement of key commodities prices at a basket level, is now seeing inflation of 12.6% in August against a year ago, lower than the 16-17% inflation seen in the previous three months.

“While there are already signs of correction in the prices of some key commodities from their peak levels during the quarter, companies are still holding high-priced inventory, at least till second quarter of FY23,” said the report. 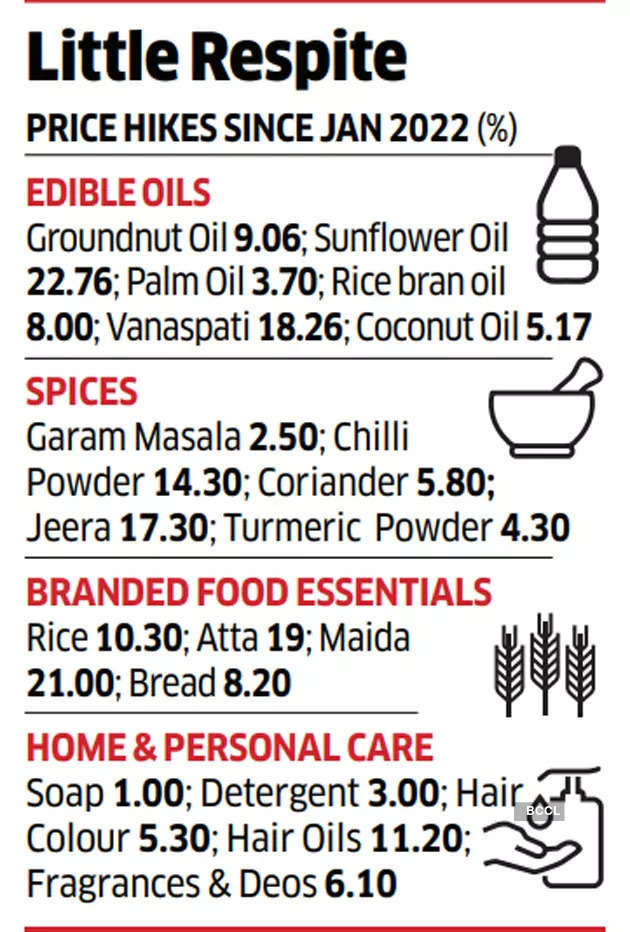