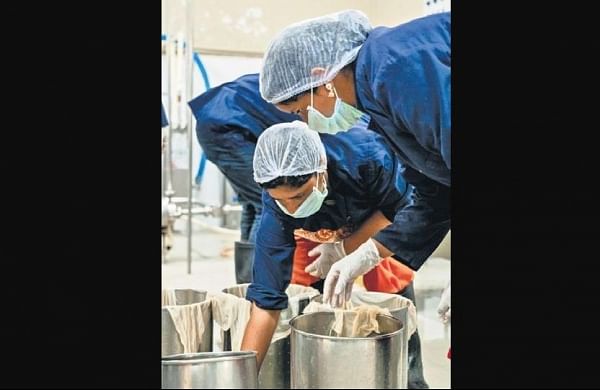 In their day jobs, Arvind Chawla is a self-ascribed ‘corporate slave’ while Saurabh Vinayak designs eclectic, niche homes in the hills, but it is their passion project that supports up to a 1000-farmer-families settled over 12 villages atop the mountains of Kumaon. Darima Farms produces a range of organic cow’s milk cheeses, among a scattering of herbs and dollops of honey, but given it’s the first category that lights up all the fun parts of the brain we’ll stick to the cheese.

“I had bought a house from Vinayak on his estate in the hills in 2014, and we were talking about the lack of opportunity in the hills for locals and how they all had to go to cities for service and call centre jobs. First, we tinkered with aggregating the orchards there and improving the quality of the fruits, but it was in 2016 when we first thought of cheese,” recalls Chawla. Given their disdain for the heavily processed preservative-filled products in the market, including cheese, the two also wanted to make artisanal cheese using solely natural means from fresh milk, eschewing preservatives, additives and other chemicals.

The two spent all of 2017 learning the art of cheese-making, before launching Daria Farms, named after the village of origin, in early 2018. “We started with the milk of our own five cows and began with producing three varieties of cheese, about 60-100 kgs a month. Now we are producing about 1.2 tons a month in eight varieties,” says Chawla, explaining that Darima began with gifting 20 cows to the village on the understanding that the families would supply the creamery with milk for their cheese, apart from taking care of their own needs.

They have since also aggregated with single-animal farms and larger ones to source the milk. Today, the milk is collected daily from 12 collection points at the 12 villages scattered around the creamery before being processed into the various cheeses. “We have a team of 12 trained cheesemakers, all local and mostly young women previously employed as house helps and other unskilled jobs, who now know how to differentiate between and make different kinds of cheese, and so have picked up a skilled trade,” shares Chawla.

Apart from the good Darima Farms is doing for its neighbouring communities, cheese boards across India are all the better for it. “We began by bringing cheeses we had made for ourselves down to friends in Delhi, and initially only sold at one store. Today, we are in around 25 cities pan- India across 60+ outlets. We also have ties with leading hotel chains and restaurants, who identify our products on their menus,” notes Chawla, adding that the lockdown helped increase their B2C reach with more and more people ordering gourmet cheeses at home. Basically, it’s gouda for all.