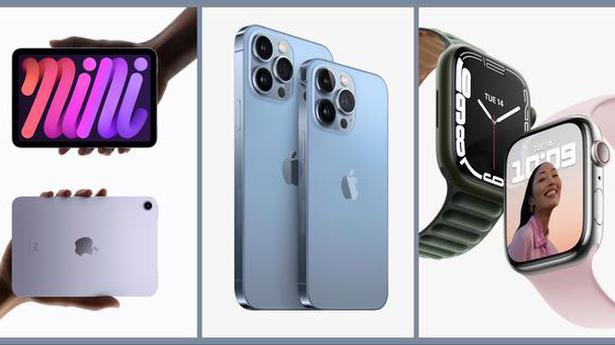 Apple CEO Tim Cook and his team of engineers announced four new iPhones, a more durable Watch and an upgrade to the company’s top-selling iPad at the virtual ‘California Streaming’ Special Event

It’s that time of the year: the leaves are falling, the weather gets cooler… and Apple announces a range of new iPhones (and whatever else the California tech giant is happy to reveal amid the umpteen ‘leaks’). While many are disappointed there were no new AirPods announced, classic devices such as the iPad have been given the predicted boosts such as faster processors, heftier battery power and more vivid displays.

So we break down the 75-minute event into a few-minutes read just for you.

A couple of new iPads

Apple breathed new life into its classic iPad to create the 9th generation of its top-selling tablet. It features the A13 Bionic chip that packs even more performance and capability into the most popular iPad, all while retaining its all-day battery life.

Look forward to a 10.2-inch Retina display with True Tone, a 12 megapixel Ultra Wide front camera with Centre Stage, support for Apple Pencil (1st generation) and Smart Keyboard, the intuitive iPadOS 15, and twice the storage of the previous generation.

Wi-Fi models of iPad (9th Gen) are available with a starting price of ₹30,900, and Wi-Fi + Cellular models start at ₹42,900, in silver and space grey finishes. It starts with 64 gigabytes of storage — double the storage of the previous generation — and a 256-gigabyte option is also available.

The 2021 iPad mini comes with a larger 8.3-inch Liquid Retina display — in four gorgeous finishes. Featuring the brand new A15 Bionic chip, the new iPad mini delivers up to 80% faster performance than the previous generation.

iPad mini comes in a new array of finishes, including space grey, pink, purple, and starlight.

Probably its most drastic hardware upgrade is the USB-C port allowing for faster connectivity, and cellular models with 5G. Users can expect up to 5 gigabytes per second data transfer, which is ten times faster than the previous generation, and connects to a vast ecosystem of USB-C accessories, including cameras and external storage and displays up to 4K. It also comes with new advanced cameras, Center Stage, and support for Apple Pencil (2nd generation).

Wi-Fi models of iPad mini are available with a starting price of ₹46,900 and Wi-Fi + Cellular models start at ₹60,900. It comes in 64-gigabyte and 256-gigabyte configurations, and in pink, starlight, purple, and space grey finishes.

As predicted, Apple launched the Watch Series 7, featuring a re-engineered Always-On Retina display that offers nearly 20% more screen area and thinner borders at just 1.7 millimetres — 40% smaller than those on Apple Watch Series 6. While the wrist is down, the Always-On Retina display is up to 70% brighter indoors than that of Watch Series 6, making it easier to see the watch face without having to lift the wrist or wake the display.

Users may notice narrower borders that allow the display to maximise screen area, while minimally changing the dimensions of the watch itself. The display of Watch Series 7 has a unique refractive edge that makes full-screen watch faces and apps appear to seamlessly connect with the curvature of the case.

One can expect two unique watch faces — Contour and Modular Duo — as well as improvements to the display. The user interface is optimised to take advantage of the shape and size of the new display, offering two additional larger font sizes, and a new QWERTY keyboard that can be tapped or swiped with QuickPath™ — allowing users to slide a finger to type — and utilises on-device machine learning to anticipate the next word based on the context, making text entry easier and faster.

As more people rely on their smartwatches for fitness needs, the company has made the Watch Series 7 its most durable Apple Watch yet, with a redesigned front crystal with a stronger and more robust geometry that is over 50% thicker than that of Watch Series 6. It is the first Apple Watch to have an IP6X certification for resistance to dust and maintains a WR50 water resistance rating, so whether you’re a desert biker or a swimmer, your Watch will be in safe hands – pun intended. To top it off, users will benefit from the same all-day 18-hour battery life, now accompanied by 33% faster charging.

Watch Series 7’s health features include an electrical heart sensor and ECG app, and a Blood Oxygen sensor and app.

Watch Series 7 seems to be the device for cycling enthusiasts not just for its tougher design but also its use of advanced algorithms to analyse GPS, heart rate, accelerometer, and gyroscope data to detect when users begin a ride, so the Watch prompts them to start an Outdoor Cycle workout if one was not initiated. As with all automatic Workout reminders, cyclists will see their metrics from when they first started their workout. Additionally, cycling workouts have auto-pause and resume, so metrics more accurately reflect time spent moving versus stationary, like waiting at a stoplight.

Watch Series 7 will be able to more accurately measure active calories when riding an e-bike, with an updated cycling workout algorithm that evaluates GPS and heart rate to better determine when users are riding with pedal-assist versus leg power alone. New voice feedback through the built-in speaker in the Watch (or any Bluetooth earphones) will also automatically announce workout milestones and Activity ring status, helping users stay focused during activities like running or HIIT.

With no prices announced just yet for India, the Apple Watch Series 7 will be available later this year.

It took a while but we finally got to the best part. There was a little debate about whether or not Apple would go for the 13 in the name but it seems the company is not into superstitions. Across all four new iPhones, the front True Depth camera takes up less screen real estate to prioritise the display, an are powered by Apple’s latest A15 Bionic which also feature in the new iPads.

The improved Super Retina XDR OLED displays deliver an incredible contrast ratio for true blacks and a 28% increase in max outdoor brightness at 800 nits, with higher peak brightness for HDR content like photos and videos at 1200 nits, all while being more power-efficient.

Also common across all four iPhone 13s is the Cinematic Mode, which seemed exciting but it is probably best to hold the applause and try it out to see if Apple has truly delivered. After all, True Depth did not live up to its long-generated hype. So what is Cinematic Mode? Leveraging rack focus, Cinematic Mode on iPhone records videos of various subjects with a depth effect with automatic focus changes, so anyone can capture cinema-style moments.

For creative control, the focus can be changed during and after capture, and users can also adjust the level of bokeh in the Photos app and iMovie for iOS, and coming soon to iMovie for macOS and Final Cut Pro, making the iPhone 13 lineup the only devices able to edit the depth-of-field effect in the video even after recording. Enabled by A15 Bionic and advanced machine learning algorithms, Cinematic Mode records in Dolby Vision HDR. Both models also offer HDR video recording with Dolby Vision — from capture to editing and sharing — now supported for 4K up to 60 frames per second on all cameras.

If you are excited about the possibility of a price drop for the iPhone 12 series, check out our review of all four phones here.

Look forward to a new Wide camera, with 1.7 (micrometre) µm pixels with the biggest sensor ever in an iPhone dual-camera system that can gather 47% more light for less noise and brighter results. Sensor-shift OIS — introduced in iPhone 12 Pro Max — also comes to the Wide camera, even in the more compact iPhone 13 mini. This stabilises the sensor instead of the lens so shots are more steady, while the custom-designed Ultra Wide camera with a new sensor captures images with more detail in the dark areas of photos and videos with less noise.

Now let’s talk about Pro models. Offered in both 6.1-inch (iPhone 13 Pro) and 6.7-inch (iPhone 13 Pro Max) sizes, the intelligent new display leverages a more efficient OLED panel offering the brightest display yet on iPhone with up to 25% higher max outdoor brightness, at 1000 nits. The Pro models also come with Super Retina XDR with ProMotion, supporting an adaptive refresh rate from 10 Hertz to 120 Hertz, for fast frame rates when users need it and preserving battery life.

The chrome-finish edges of the iPhone 13 Pro and Pro Max which are available in graphite, gold, silver, and sierra blue.

The Pro models’ camera game should be on point with a new Wide camera that has a larger sensor with 1.9 (micrometre) µm pixels for less noise and faster shutter speeds needed across lighting conditions, producing even more detailed photos. Coupled with the larger ƒ/1.5 aperture, the Wide camera on iPhone 13 Pro and iPhone 13 Pro Max offers a massive improvement in low-light situations, up to 2.2x when compared to iPhone 12 Pro, and nearly 1.5x when compared to iPhone 12 Pro Max.

The new Ultra Wide camera features a much wider ƒ/1.8 aperture and a new autofocus system, bringing a 92% improvement for low-light environments, producing images that are brighter and sharper. The new lens design, autofocus capability for the first time in the Ultra Wide on iPhone, and advanced software also unlock something never before possible on iPhone: macro photography. Users can capture sharp, stunning images where objects appear larger than life, magnifying subjects with a minimum focus distance of 2 centimetres. Macro also extends to video including Slo-mo and Time-lapse.

These two models also introduce ProRes, an advanced video codec used widely as the final delivery format for commercials, feature films, and broadcasts, to offer higher colour fidelity and less compression. This new professional workflow is enabled by the new camera hardware, advanced video encoders and decoders in A15 Bionic, and a flash storage pipeline.

GST Council not for inclusion of petroleum products: Finance Minister