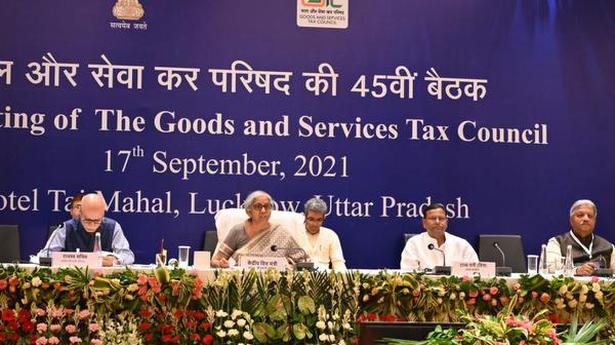 The Goods and Services Tax (GST) Council has decided to keep petroleum products out of the GST regime, while consumers will have to keep paying the Compensation Cess levied on products like automobiles till March 2026 instead of July 2022 as originally envisaged at the time of rolling out the indirect tax regime.

Union Finance and Corporate Affairs Minister Nirmala Sitharaman, who chaired the first physical meeting of the Council in nearly two years, said a discussion on including petroleum products in the GST regime was held purely at the behest of the Kerala High Court, which had suggested that the Council take it up in response to a writ petition.

“The Council members spoke very clearly that they don’t want petroleum products to be included in GST at this time. We shall report the same to the court that the Council has discussed it as per their desire, and the GST Council felt this wasn’t the time to bring petroleum products into GST,” Ms. Sitharaman said.

The Minister also indicated that the Union government is not inclined to consider some States’ demand to extend the five-year period for which they have been assured a 14% revenue growth for giving up several taxation powers to pave the way for implementing the GST regime. “Legally, compensation was to be paid for five years till July 2022 with an assured level of revenue for the States,” Ms. Sitharaman said

While the GST regime had originally been premised on a revenue-neutral tax rate of 15.5%, Ms. Sitharaman said the actual GST revenues had been going down with the effective tax rate slipping to 11.6% due to changes made in the tax rates on various goods and services over the last few years.

“A detailed presentation was made on the revenue generation aspects, correction of inverted duty structure aspects and the various ways in which the revenue neutral position, which was 15.5% at the time of introduction of GST has steadily come down to 11.6%,” she said.

“(To be) revenue neutral is to keep it at 15.5% and actually, therefore, if revenues are coming down and you think it is not helping the overall GST collection, what was arrived at the time of introducing GST has been, knowingly or unknowingly, brought down by reduction in tax rates of some items,” she said.

To shore up GST revenues, the Council has decided to form two groups of ministers (GoMs) that have to recommend measures within two months. The first one has been tasked with reviewing tax rate rationalisation issues to correct anomalies in the rate structure, while the other will look to tap technology to improve compliance and monitoring. This, she said, will look at e-way bills, Fastags, compliance and composition schemes to plug loopholes.

The compensation cess levied on automobiles, tobacco products and aerated water, over and above the basic GST rate, was to be tapped for covering the gap between States’ actual revenues and the 14% annual revenue growth for five years they were assured for adopting GST.

In 2020-21, the Centre had borrowed ₹1.1 lakh crore on behalf of States to bridge the shortfall in the GST Compensation Cess collections that arose due to the COVID-19 pandemic, but some arrears are still pending, Ms Sitharaman noted. Similar borrowings have also been made this year of about ₹75,000 crore, with another ₹83,000 crore more estimated over the remaining part of the year.

The Council had decided last year that the Compensation Cess levy will be extended to repay the principal amount as well as the interest payable on these borrowings.

“As things stand now, the GST Compensation Cess would have to be extended beyond July 2022 till March 2026 in order to repay the principal and interest on the back-to-back borrowings raised to meet the GST compensation shortfall for States last year as well as this year,” Ms Sitharaman said.

“The extension of compensation cess levy upto March 2026 is expected to impact consumers as the same will be recovered from them,” remarked Rajat Bose, partner at Shardul Amarchand Mangaldas & Co. He added that the consensus in the Council to keep petroleum products and natural gas outside the GST regime, was contrary to the expectations of the general public.

Explained | What is the extent of India’s coal crisis?